This article is about the former Channel 5 Station CEO. For the television robot, see Blank TV. For the dimension, see Blank Dimension.

"I must dispose of these peons who spread truth like disease!"

Chief Blank (ブランク, Buranku) is the former CEO of Channel 5 and the secret main antagonist of Space Channel 5. His goal is to use TV to brainwash the masses so his Channel can get more ratings.

Not much is known about Blank besides the fact he is obsessed with ratings.

It is known, however, that his favorite color is plaid and he loves ratings above everything else. He’s also apparently been watching Ulala’s progress for some time, enough to design a robot after her.

Also he is indirectly responsable for the demise of Ulala's parent's as the Gyun Gyun Guide Book reveals that Blank is allegedly responsible for the spaceship accident which they were fatal victims.

Blank appears to not be a very sane person, he will do anything to reach his goal, that includes brainwashing a whole alien species, he also doesn't care about anyone other than himself, as he will hurt anybody who gets in his way, even his own employes.

Blank seems more friendly in the sequel than in the first game, teaching the player nice tips to get a perfect score.

Blank secretly starts sending a brainwashing signal to the Morolians, ordering them to make people from Earth, however he isn't seen nor mentioned by anyone until the fourth report, after Jaguar finding out that the brainwashing signal frequency is the same as Channel 5's, Ulala, Jaguar and Pudding invade the Channel 5 headquarters and find out that he is the one responsable for the Morolian's invasion, he first appears at the boardroom giggleling and watches Ulala freeing the Morolians in front of him, as soon as she does that, Blank escapes, he is later found again at the control room after Keyboard Grrrls gets rescued, he says he is impressed by how skilled Ulala is and tells her if she wants to know the truth, she must follow him, Blank runs away again and leaves Hoorg and the remaining brainwashed Morolians to fight her.

Once Ulala defeats the Morolians and goes after him, she reaches the Channel 5's antenna where Blank reveals that he believes truth to be like a disease and that all reporters should share his vision. He sends out “Ultimate Reporter” Evila to defeat Ulala, but the later gets eventually defeated, as a backup plan, he uses Giant Evila to grab the Astrobeat spaceship with Fuse still inside it Ulala, Jaguar and Pudding start a fight against the mecha where they must shoot at the opposite direction Blank says.

Giant Evila flings a hand at Pudding and then Jaguar, leaving Ulala to fight alone. The sound system cuts off and Ulala is shot off the Astrobeat Jr., left to float in space.

Jaguar saves Ulala and the reporter is back to finish the battle. Soon, the Giant Evila's head of the abnormal robot lifts off and spins, revealing Blank TV. The CEO then reveals that the reason why he brainwashed was all for the ratings. Blank activates the Blank Dimension, sucking Ulala inside, to defeat him, Ulala will need to shoot at the TV monitors with Blank's face in it and shoot with the rescue beam at the monitors with her face,

With Ulala feeling the rhythm of her chant support, the Blank Dimensions breaks out. Using five television screens to hold himself up, Blank starts one last dance battle against Ulala, once he gets tired, Fuse tells the crowd to focus all their energy into the station’s antenna to defeat Blank once and for all.

Sometime after this but before Part 2, he resigns. [1]

Blank gets replaced by Space Michael as the Channel 5's chief.

Chief Blank makes cameo during Extra Mode of the fourth report. Where he appears as a hostage during when Ulala is trying to save the Cheerleaders.

There's also a battle against Blank in the Ulala Dance Mode mini game, though only if the player is using the Morolian outfit, Blank appears by achieving 190% views and is defeated by reaching 200% views.

The game also features a Blank outfit, which is unlocked by playing the game for 3 hours.

Blank's in-game profile reveals a cheat code which activates the Invincibility Mode, where the CPU will takes control of the game and plays it perfectly, activating all the secret moves and achieving 100% (or 200%) in the levels.

Blank as seen in the Space Channel 5 Part 2 Guide Book. (Japan Only)

Blank TV in his Blank Dimension.

Blank, sitting on the elevator chair leading to the main antenna. 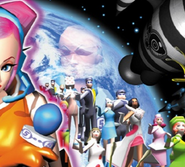 A close view on the wallpaper featuring Blank image on the Earth. 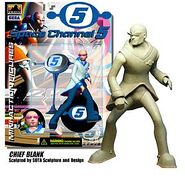 Blank shown on the VMU of the dreamcast from the first game.
Add a photo to this gallery

Retrieved from "https://spacechannel5.fandom.com/wiki/Chief_Blank?oldid=9522"
Community content is available under CC-BY-SA unless otherwise noted.